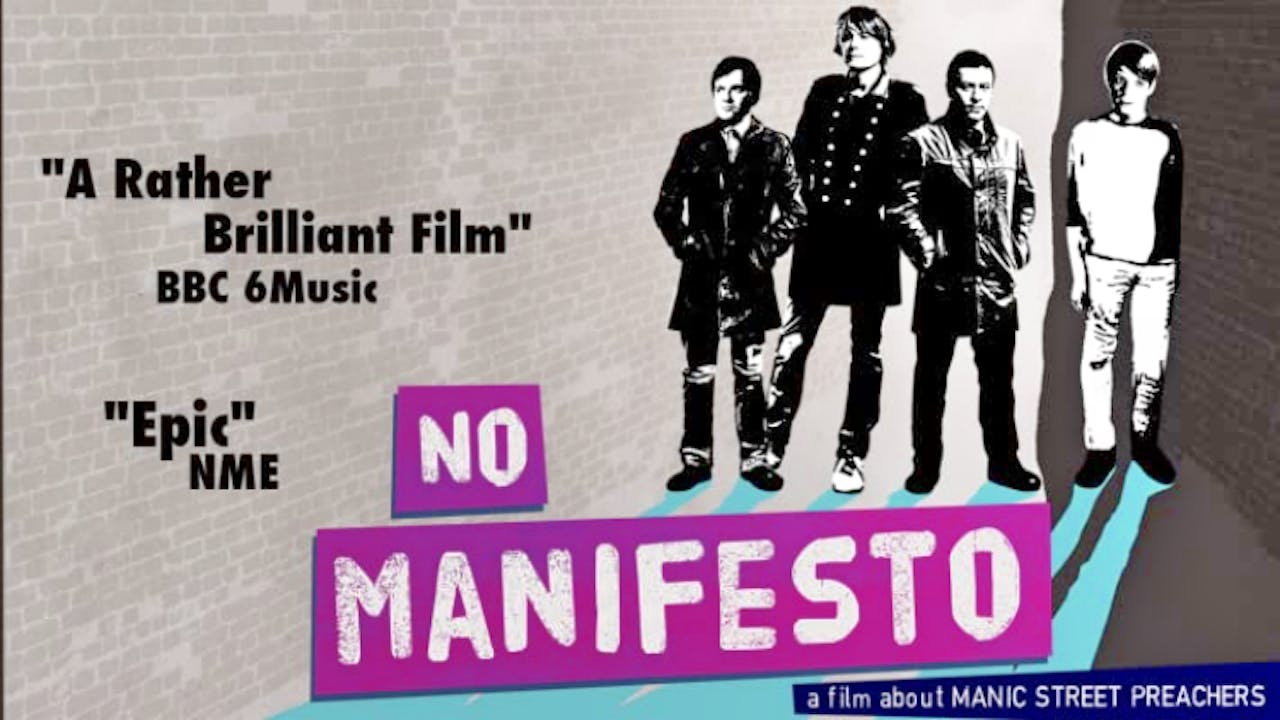 No Manifesto is a movie about the Welsh band Manic Street Preachers. It's the story of four lads from a Welsh mining town and how they came to be one of the biggest bands in the world. Still struggling to come to grips with their Welsh identity and their tragic past, the Manics, like their music, are opinionated, introspective, inflammatory and as Castro so aptly put it, ”Louder than war!”

"One of the best things about this new Manic Street Preachers documentary from director Elizabeth Marcus and producer Kurt Engfehr is that it dispenses with the usual cast of journalists and talking heads, and lets a wealth of brilliant footage speak for itself.

Marcus and Engfehr interviewed nearly 100 fans for the film – which took 13 years to make – letting them narrate the story and taking their questions to the band, often in strikingly intimate situations. Like a skilful nature documentary team, the pair gradually earn their subject’s trust, until not only do we get to see the Manics in the nitty-gritty of recording for 2007’s renaissance album ‘Send Away The Tigers’, but also Sean Moore indulging his habit of target-shooting, Nicky Wire larking about in his garden and James Dean Bradfield cooking a righteous fry-up. Brilliantly, there’s also Nicky’s VHS recording of the Manics’ second-ever gig at Blackwood Little Theatre, complete with Cardiff football fans bellowing, “You’re worse than Swansea City.”

The film errs, rightly, on the side of sprawl and humour, leaving in charming digressions such as Nicky and James nerdily interviewing Canadian prog rockers Rush, or one fan’s introduction to her hamsters, Nicky and Richey, alongside well-chosen archive interviews. As one of the foremost fan tribes of their generation, it’s about time Manics acolytes got a worthy tribute and here, they come across as clever, curious, sardonic and warm – though, as Nicky notes, “sometimes they despise us, and sometimes we despise them”

That prickly relationship is illuminated beautifully, not least when James stomps down a Cardiff street mewling, “‘Oh, you’re so fat now’, ‘Oh, that song is shit’, ‘Oh, they used a drum sample…'”

This loose structure also means a welcome lack of editorialising; Marcus and Engfehr only really show themselves via some lovely editing. At one point, they segue from James talking about Richey Edwards’ realisation that he’d taken a wrong turn as his mental state deteriorated, to Richey, wryly musing: “Future… that’s a big nasty word, isn’t it?” A clip from Rumble Fish, a favourite film of the band’s, follows. In it, a young, beautiful Mickey Rourke, when compared to the Pied Piper, drawls “They’d all follow me to the river, huh? And jump in?… Y’know, if you’re gonna lead people, you have to have somewhere to go,” before walking out of a door and in front of a huge clock face, being hauled away on a scrap van. That scene then cuts, beautifully, to the giant clock in the video for ‘Everything Must Go’, the 1996 single that declared the Manics’ determination to survive Richey’s departure. Such juxtapositions in this cleverly crafted labour of love remind you of the cultural collages so beloved of Nicky and Richey; images and ideas tumbled together to let meanings emerge by themselves." NME